On the sidelines of the handover ceremony between the incoming and the outgoing Secretaries General of the Pan African Postal Union (PAPU) held at the Union’s headquarters in Arusha (Tanzania), the PAPU Administrative Council Chairman and Postmaster General of Côte d’Ivoire Post, Mr. Isaac Gnamba-Yao, visited the construction site of the new headquarters building christened “PAPU House”.

Accompanied by the Union’s Assistant Secretary General, Mrs. Sseengooba Jessica, Mr. Gnamba-Yao said he was particularly impressed by the sheer scale of the project and pleased with the pace of progress of the construction works. He congratulated the engineering team led by Hanington Kagiraki and urged them to do their utmost best to complete the project in due time by June 2022. He equally called on the PAPU General Secretariat to closely monitor this landmark project which is dear to the hearts of all 45 Member States of the Union. 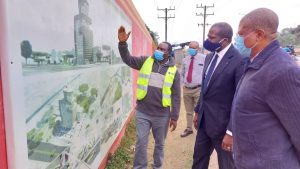 Established in 1980 as a specialised institution of the then Organization of African Unity (now African Union) by decision of the Plenipotentiary Conference of 35 OAU member countries meeting during an inaugural session in Arusha from 8 to 18 January 1980, PAPU is headquartered in this selfsame city. As Africa’s flagship organization mandated to spearhead postal development on the continent, PAPU’s membership has grown from 35 Member States at its inception to 45 today.