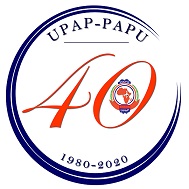 The General Secretariat has the honour to announce that the Pan African Postal Union (PAPU) will celebrate its 40th Anniversary on 18th January 2020 in Arusha, United Republic of Tanzania.

This is to mark the establishment of the Union by the Heads of State and Government of the then Organization of African Union (OAU), pursuant to a Resolution taken during their meeting of 2nd to 6th July 1977 in Libreville, Gabon. Thereafter, the Convention formally establishing PAPU as a specialized agency of the OAU was signed during the Constitutive Plenipotentiary Conference held on 18th January 1980 in Arusha.

Organized under the distinguished patronage of the President of the United Republic of Tanzania, His Excellency Dr. John Pombe Joseph Magufuli, celebrations will take place from 17th to 19th January 2020. The main activities will be hosted at the Arusha International Conference Centre (AICC).

In this respect, an activity-packed programme will be rolled out, highlighting issues of paramount interest to the postal industry in Africa in particular and the world at large. The event will equally provide a platform for networking with a view to enhancing cooperation among leading African and global policy-makers, operators, partners and other key stakeholders of the postal sector.